Since Mamadou Sakho made his debut for Crystal Palace, the club have only conceded one goal, and that was against Chelsea. The Frenchman’s performances have been excellent and Sakho will play a big part in Crystal Palace staying up should Sam Allardyce manage to keep them in the Premier League.

Sakho fell out with Jurgen Klopp during the summer and his exit from Liverpool was then only a matter of time. The defender had been a fan favourite at Liverpool, but Klopp made it clear there was no way back and the player was sent to train with the club’s U23s.

Given he’s spent much of the season frustrated at Liverpool, Crystal Palace’s victory over Chelsea was especially pleasing for Sakho. Quoted by French newspaper L’Equipe, the Liverpool owned player said: “We can be proud of ourselves. I’m just trying to give my maximum. I am happy for the club, for the fans, and for my loved ones, for all those who supported me in this mini storm.” 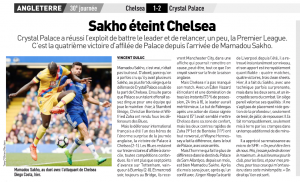 Despite not being able to get £20m for Sakho during the January transfer window, The Liverpool Echo now report the player’s asking price could be £30m, because of his Crystal Palace performances.

That seems on the high side and, as Sakho has already shown, he’s not simply going to sign for the club which pleases Liverpool the most.