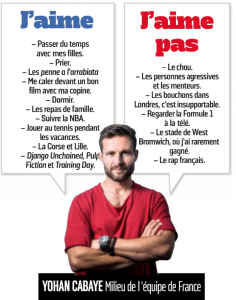 We’ve come to that stage in a tournament when there’s a day without football. And, in the case of Euro 2016, it’s a very painful two days we’ll all have to wait for the games to start again.

As the footballers get some much needed rest, French newspaper L’Equipe have a bumper edition looking at the French team and squad.

Crystal Palace star Yohan Cabaye is wheeled out to give a brief list of the things he likes and dislikes in life. It’s brief, but revealing nonetheless.

Cabaye likes spending time with his daughters, is a big fan of eating penne arrabbiata whilst watching a film with his girlfriend, likes sleep, NBA, family meals, and playing tennis whilst on holiday.

His favourite places in France are Lille, where he got a brilliant reception as a local boy on Sunday evening, and Corsica, and his favourite films are Django Unchained, Pulp Fiction and Training Day.

More interesting is what Cabaye doesn’t like. A major part of his list is West Brom’s ground. The Hawthorns has left such a mark on Cabaye, because of poor performances and results, that he’s picked it out as a place which irks him.

Other things on the dislike list include cabbage, ‘unbearable’ London traffic, aggressive people, liars, watching F1 on TV, and listening to French rap.