There’s been big drama over the past 24 hours in Eindhoven, as Steven Bergwijn has tried to force his way out of PSV. The 22 year old attacker has been the subject of an offer from Tottenham Hotspur and wants to make sure the move happens before Friday’s transfer deadline.

PSV will sell, however, they want more than the €30m being offered by Spurs and payment terms which are favourable to them.

They can then look to make their own late moves in the market, with De Telegraaf reporting Patrick van Aanholt is a firm option. Signing for Crystal Palace in 2017, the 29 year old is currently out with an injury.

He’s made 17 appearances for Roy Hodgson’s side this season, scoring two goals in the process. 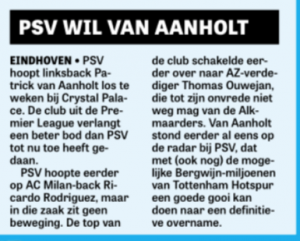 De Telegraaf say Crystal Palace ‘require a better offer’ from PSV than what has already been made.

In that regard it’s thought the funds from selling Bergwijn to Tottenham will help the Dutch club come up with something better.