Crystal Palace’s Vicente Guaita turned 34 years of age earlier this month and his contract at Selhurst Park will run down at the end of this season.

Two days ago, we carried a report from Mundo Deporitvo, which explained Real Sociedad are studying the operation to sign the goalkeeper, either immediately or in the summer.

Within the report, it’s explained the keeper is ‘ready to sign’ for the La Liga side as Guaita has decided to pick La Real over the two alternatives he had.

It’s claimed the Spanish club are studying whether to take the custodian in the ongoing window or wait for a few months to sign him on a free transfer.

Miguel Ángel Moyá is recovering from an injury. Real Sociedad have to take this into account and also the need to negotiate with the Eagles to secure Guaita’s services in the winter market.

Mundo Deportivo have it ‘confirmed’ Guaita’s choice is Real Sociedad, and his camp are now waiting for Imanol Alguacil’s side to take a decision. There’s an agreement in advance 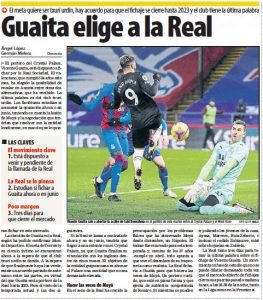 between the two parties for a contract until 2023.

For La Real to take the Spaniard immediately, they will have to agree a deal with London club.

Real Sociedad’s ‘objective’ is to pay Crystal Palace an amount that is ‘not too high’.

Whether or not Roy Hodgson and his side will agree to it is still not clear. Sociedad have until Monday to have the ‘last word’ on Guaita.