Once an immovable object in Crystal Palace’s plans after they spent upwards of £25m on his services from Liverpool, Mamadou Sakho’s time on the pitch has strongly dwindled of late.

The veteran has only made four appearances under Roy Hodgson this season in the Premier League, and with hopes of perhaps returning to the France squad once more before calling it a day, it might be best for the 30-year-old to find himself somewhere where he can play regularly.

Thankfully, his reputation, regardless of past injuries, remains good enough that competitive sides, such as OGC Nice in Ligue 1, are happy to welcome him.

That’s what Nice-Matin are reporting on Thursday, claiming the French side ‘aren’t abandoning the idea of signing an experienced defender’ in January despite acquiring William Saliba on loan from Arsenal. 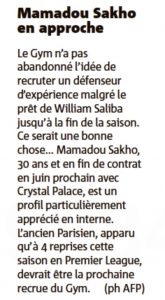 They then go on to explain that Sakho, contracted to Crystal Palace until the end of the current campaign, is a profile ‘particularly appreciated within the club’, adding the former Liverpool and Paris Saint-Germain man ‘should be Nice’s next signing’.

That’s a strong claim, and one we’ll be keeping an eye on, but with hefty wages and no real desire from Hodgson to feature him regularly, it shouldn’t be too hard to convince the Eagles to let the Frenchman go.