Not that bit of useless but nevertheless interesting trivia is out of the way, we can turn our attention to Luka Milivojevic telling everyone in Serbia to calm down about the recent change in national team captain.

Long time skipper Branislav Ivanovic, currently at Zenit St Petersburg, is having the armband taken away from him and that has obviously created some controversy.

There had been worries in Serbia that it would annoy the country’s squad and therefore cause issues ahead of the World Cup. Like every other country, Serbia serves to make its own dramas ahead of the tournament in Russia.

But Milivojevic isn’t having any of it. The Crystal Palace midfielder says there’s no issue and even if the squad didn’t agree it wouldn’t really matter, because it’s not their place to choose. 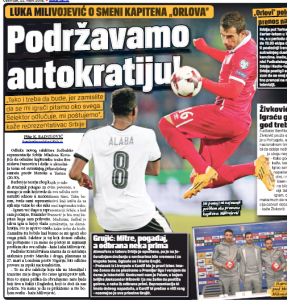 Quoted by Serbian newspaper Alo!, Milivojevic explained: “I have been playing for a long time in the national team of Serbia, and when I started, Branislav Ivanovic was my captain and I accepted it. However, football is such a game in which autocracy is governed, not democracy, and that’s exactly how it should be.

“Imagine what would have been if the players were asking about everything. The selector is the one who makes the decisions, we respect and there is not even the slightest problem for me.”