The name Christian Kouamé is one Crystal Palace fans are very familiar with ever since their club came very close to signing the Ivory Coast U23 international.

The striker, who currently plays for Fiorentina, was on the verge of moving to Selhurst Park before injury struck, which scuppered the move at the last minute.

Following that, he decided to move to Florence, where he has played, but not in a key  role.

At 23 years of age, he would probably be expecting to feature a bit more than he currently is, and there have been some rumours a move could take place in the near future. 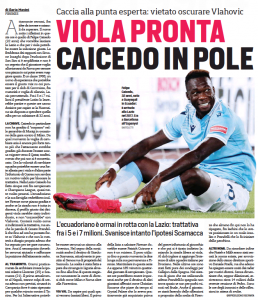 Leeds United have been added to the mix in the past week or so, but Crystal Palace haven’t gone away.

At least, that’s what Corriere dello Sport are reporting on Wednesday, who explain Kouamé has ‘long been liked’ at the London club, and their interest has now been added to a list including ‘other Italian teams’.

There’s no mention of what type of deal Roy Hodgson and co. would be prepared to offer going forward, but considering Fiorentina paid close to £10m in the first place to acquire his services permanently, there’s every chance the Serie A side will be looking to recoup that at the very least.