On Thursday, it was made clear that Crystal Palace were very much still in the running to potentially acquire Aaron Ramsey from Juventus, and a deal could happen at any moment.

Talks were said to be taking place, and Gazzetta dello Sport, who were the ones to bring the news 24 hours ago, are adamant the Eagles are the best positioned, quickly updating their readers by telling them the Selhurst Park based club are ‘first in line’ to sign the Welshman.

A separate article in the same newspaper also mentions Ramsey and Crystal Palace following the news he has now recovered from Covid-19, making it clear he is ‘negotiating’ with Patrick Vieira’s side.

As for Corriere dello Sport, they also mention the Premier League club and Ramsey, but are a bit more pessimistic about it all, admitting that while Juventus are ‘open to the loan’, the player himself ‘is still far from an agreement’ with any club, including the Eagles. 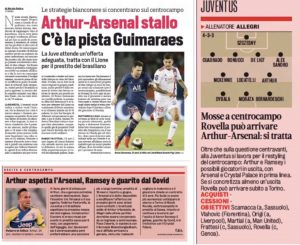 If we take all this at face value, then it appears that while Crystal Palace are indeed interested in bringing the player back to England, they still, for some reason, have a lot of work to do to convince him he’s better off playing actual football on this side of the Channel than sitting around twiddling his thumbs in Turin, albeit doing so while earning a nice, hefty wage.