Raúl Jimenez is now Benfica’s main man to make some money. After selling Ederson, Nelson Semedo and Victor Lindelof, the Eagles hope they can raise more millions from the Mexican striker, and as always it’s the Premier League as the desired destination.

This time Benfica are eyeing the bank accounts of Everton, West Brom, and Crystal Palace.

The Portuguese club are currently in England as part of their preseason and the presence of president Luis Filipe Vieira could accelerate the player’s sale to a Premier League side.

Record Portugal, Record Mexico and O Jogo all have stories about Jimenez’s potential move today, but it’s only Correio da Manhã who come up with some new claims. 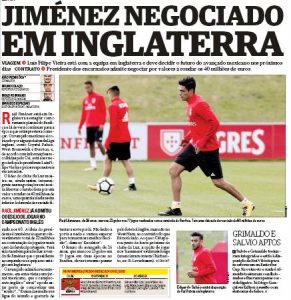 Benfica are said to be demanding €40m. If true, these claims already dismiss the reports which said Everton had offered €45m a few weeks ago.

Crystal Palace, Everton and West Brom all want the player, say Correio, but it’s not made clear what moves, if any, have been made.

Just like other outlets, they rule out the possibility of a West Ham move, saying the option is ‘further away’ after the club announced the signing of Javier Hernandez.

The original claim of Everton offering €45m was laughable, and €40m isn’t much more serious. It’s unlikely the Toffees, West Brom or Crystal Palace would pay such a fee and an offer of €30m would surely be considered, and should probably be grasped.