On Saturday we covered a report from L’Equipe which claimed Crystal Palace have moved in for Adil Rami.

The defender is expected to leave Sevilla during the summer transfer window, and L’Equipe claimed Crystal Palace have started negotiations and are set to present the player with a proposal.

Palace will come up against competition from Turkish side Besiktas and France’s Marseille.

Sunday’s edition of the French newspaper says that Crystal Palace have declared their interest, but there doesn’t appear to be much of a leap forward on that. L’Equipe mainly cover the Marseille slant and say if the French club can agree personal terms with Rami, they’ll then talk to Sevilla.

The Spanish club want a transfer fee of €6m, but Rami’s representatives believe something around €4m would be fairer. 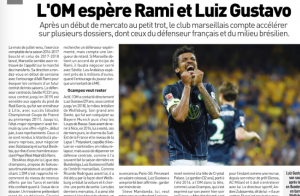 With it being an article on Marseille transfers, L’Equipe inevitably mention Steve Mandanda, and claim the goalkeeper is set for talks with Frank de Boer this week.

Mandanda will inform the new Crystal Palace manager that he still wants out, and encourage the club to find an agreement with Marseille.