Tottenham Hotspur suffered their first defeat of the campaign when they lost to Crystal Palace on Saturday.

Nuno Espírito Santo will be hoping his side can bounce back when they face Rennes in the UEFA Conference League on Thursday.

Spurs are likely to have an advantage since the Ligue 1 side are struggling with injuries and some of their players have to quarantine on their return from national duty.

The French club suffered a 2-0 defeat to Reims on Sunday and L’Equipe say summer signing Lovro Majer withdrew at the last minute due to a hip injury. In addition to this, Birger Meling ‘forfeited’ from the tie following concerns over his fitness [adductors].

Martin Terrier suffered a knee injury, forcing the winger to come off the pitch before the half hour mark and he joins Jérémy Doku in Rennes’ treatment room. 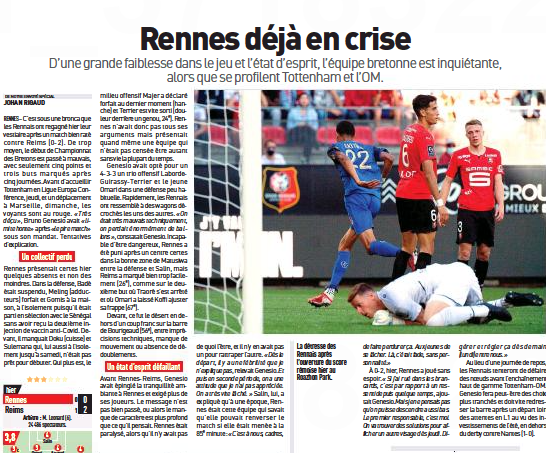 Senegal keeper Alfred Gomis had to miss the weekend clash since he had to quarantine on his return [not fully vaccinated] from the national team. L’Equipe doesn’t specify when the custodian will return, so there are doubts over his involvement against Tottenham.

Rennes have one win in five league matches and Bruno Génésio, who was frustrated with his men after Reims defeat, wants his players to bounce back against Spurs.

“There was excitement that made us bad technically, in our choices, our controls, our passes… We gave a lot of balls too easily to this team from Reims. The start of the second half is pretty good, we could have equalised on Benjamin Bourigeaud’s free kick,” the Rennes manager said.

“Then, there were attitudes that I did not appreciate, because we quickly gave up and we suffered a lot. I am disappointed, I am ashamed of the limit. vis-à-vis the public, which came in large numbers, we will digest it and we will sort it out between us tomorrow.

‘We are all responsible, me first. It’s me who makes the choices and there’s no way I’ll be left out. We will find solutions to show a different face than the one we have shown this evening.

“Tomorrow was scheduled a rest, but we will all come to the stadium to explain it all. The idea is to be able to move forward together, while looking towards the upcoming game. We will see what our reaction capacity is from Thursday.”

L’Equipe say that ‘instead of a rest day’ on Monday, Rennes will ‘try to loosen the knots ahead of the top-of-the-range’ clash against the north London club. They even suggest Genesio may make ‘sharper choices and must quickly straighten the bar’ after a poor start to the season.