Home Europe ‘The contract of his life’ – Good wishes sent to player as...
SHARE

Newcastle are determined to sign Kieran Trippier and have already made an ‘irrefutable offer’ to Atlético Madrid for his transfer.

The Magpies are showing ‘more and more insistence’ to wrap up the deal and a transfer could be on the cards.

On Monday, Marca reported the La Liga winners are looking for a new right-back following the ‘imminent departure’ of the 31-year-old.

With a move to the Tyneside club closing in, today’s edition of Marca has said ‘goodbye’ to the England international and also sent good wishes to him.

Diego Simeone’s side took the defender from Tottenham Hotspur in 2019 and he was brought in to replace Juanfran, who spent eight years in Madrid. 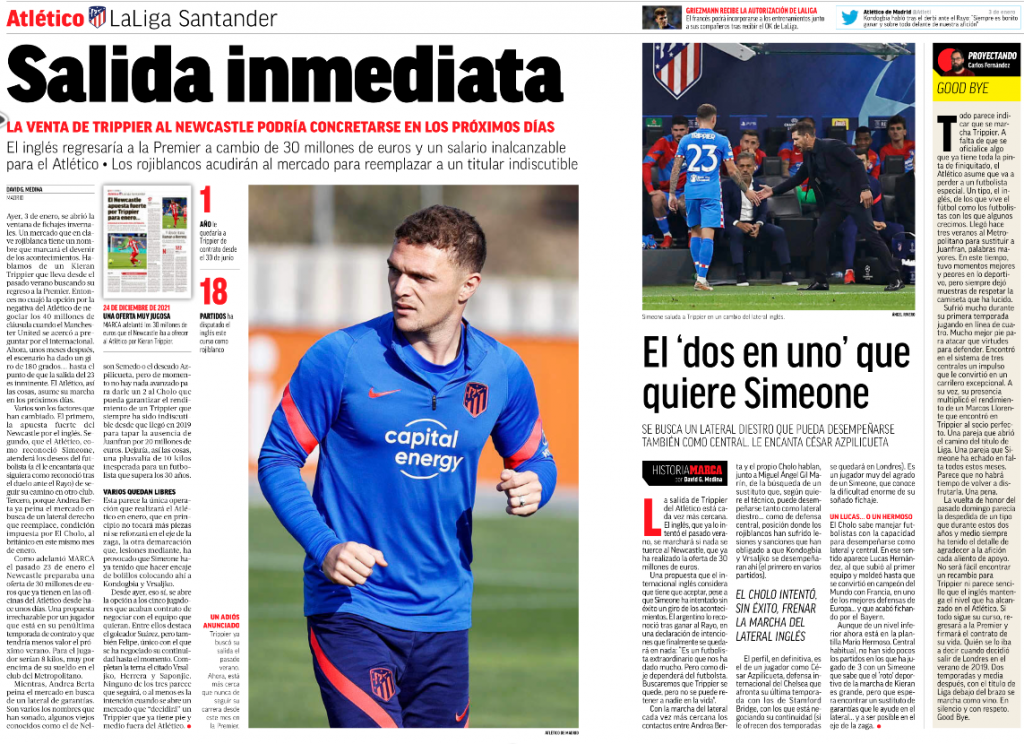 He struggled at times in his debut season in Spain. Journalist Carlos Fernández explains the Englishman ‘always left signs of respecting the shirt he has worn’, even when he was struggling.

Last term, the ex-Burnley man operated as a wing-back and was one of the vital players in Atlético’s title winning campaign, forming a partnership with Marcos Llorente.

Fernández points out the gesture made by Trippier to the home fans on Sunday and he believes it ‘seemed like the farewell of a guy who during these two and a half years has always had the detail of thanking the fans for every breath of support’.

The Marca journalist states it will be difficult for Simeone’s side to find Trippier’s successor and also for him to find the ‘level he has reached’ with the Spanish side at Newcastle.

If there are no obstacles, the player is set to return to the Premier League, where he will ‘sign the contract of his life’. Fernández ends it by stating: ‘Two and a half seasons later, with the league title under his arm, he is leaving as he came. In silence and with respect. Goodbye’.

The journalist’s comments on Trippier should give an idea of highly Trippier has been valued at Atlético, both on and off the pitch.

‘There is Liverpool’ – Reds took ‘rather concrete’ steps for huge...