Home Europe Leicester City have had ‘three meetings’ to try and convince club over...
SHARE

It was explained the Foxes’ idea is to take the forward on a two-year loan deal with an obligation to buy.

On Wednesday, Mundo Deportivo reported the La Liga winners have ‘no intention’ of accepting the English club’s offer for the 20-year-old.

The Blaugrana agreed a deal with SC Braga for the Portugal U21 international in January, with the intention of him moving in the summer.

Atalanta have also joined Brendan Rodgers’ side in chasing the Portugal U21 international.

Journalist Miguel Rico, writing for the last page of Mundo Deportivo, gives a background about Leicester and Atalanta interest in the attacker.

He claims the interest is ‘so constant’ that Leicester have already had ‘three meetings’ with Barcelona. This was done with the intention of ‘trying to change’ the Catalan club’s mind on Trincão. 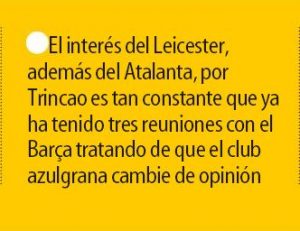 Trincão is unlikely to leave the Spanish giants this summer after Barcelona president Josep Maria Bartomeu ruled out a transfer.

“He’s is not for sale. Neither Pedri, nor Ansu, nor Ter Stegen, nor Riqui Puig, nor Araujo … These young players are not for sale. We are creating a new generation for the future,” Bartomeu told beIN Sports, as relayed by Marca.