Philippe Sandler’s decision to go out on loan from Manchester City to Anderlecht initially paid off as he featured regularly for the Belgian club in the first two months.

However, a knee injury forced him to miss the fixtures after October’s international break.

Four days later, Het Laatste Nieuws explained surgery will ‘only be the last resort’ as it was ‘not yet certain’ he had to go under the knife.

After spending over two months on the sidelines, the Dutchman returned to action and played the full 90 minutes in Anderlecht’s cup victor over Mouscron on December 5th.

It looks like Sandler has suffered another setback as Het Nieuwsblad reported he visited a specialist on Monday. 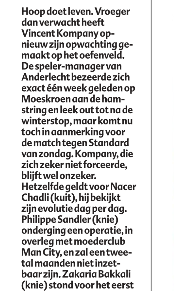 HLN now claims the defender underwent knee surgery after consulting with the Premier League winners. He will be out of action for two months.

Sandler’s injury blow will come as a concern for City as they were hoping for him to develop while playing and training alongside Vincent Kompany at Anderlecht.