Given the power of agents in the modern game, it seems no club can avoid being dragged into dealings or lawsuits at some point, and that may be what’s about to happen to West Bromwich Albion.

A Bola explain today that Vergette Sports, an company that acted as intermediaries in Matheus Pereira’s move from Sporting Club de Portugal, are taking the Portuguese club to court over the move.

For those that don’t know, Pereira moved to West Bromwich Albion on a permanent basis in August 2020 for a fee of £7.43m, having spent the previous season on loan.

He’d been the star of the show in the Championship, and that led the Baggies to sign him permanently, with the player going on to play for the club for another year before sealing a £16.2m move to Al-Hilal.

West Brom’s part of the tale was a short one, then, but it seems back in Portugal there’s a dispute brewing.

A Bola say that Vergette Sports have ‘advanced with a lawsuit’ in the Central Civil Court against Sporting for the figure of €580,000 related to commissions from Pereira’s move to the Hawthorns. 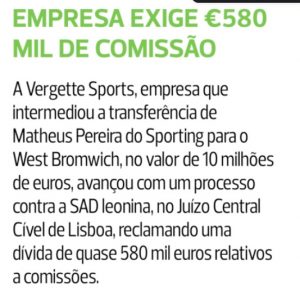 It seems they’ve not been paid what they’re owed from the deal, in which they ‘intermediated’ between the two clubs.

They now want what they’re due and have taken the case to court, presumably after Sporting refused to cough up.

Now there’s no hint of any impropriety from West Brom at this point, they appear to be out of it, but it’s worth keeping an eye on as that could always change as this court case develops in the coming months.