Tottenham secured a deal to sign Juan Foyth in 2017, fighting off competition from PSG to get the defender from Estudiantes.

On multiple occasions there was confidence in the French media that PSG had won the race for Foyth, only for Mauricio Pochettino to then change everything. A chat with his compatriot worked well, and that left the player convinced that a move to Spurs would be best for him.

Ultimately, that didn’t work out as everyone hoped, and Foyth went on loan to Villarreal in 2020. He moved permanently from Tottenham to the Spanish club in the summer 2021 window, and the 23-year-old will be pleased with how it’s all been going.

On Saturday he was a key player for Villarreal as they drew 0-0 with Real Madrid away, and AS single him out for praise, saying ‘his commitment is total’ and he showed all of his skills during the match, specifically when it came to keeping Vinicius quiet. 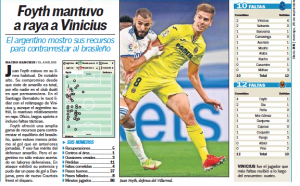 He was the most highly rated performer on the pitch, and the Yellow Submarines are clearly thrilled with their signing from Tottenham.