On March 10th, we relayed news from Belgium that there’s ‘a lot of interest’ from Premier League and Bundesliga clubs in Jérémy Doku, but he wants to continue at Anderlecht, at least until the end of next season.

It was also explained Liverpool have been following the 17-year-old ‘for a while’ and the Reds will ‘undoubtedly’ be at his doorstep in the future.

The forward made his first team debut for the Jupiler Pro League side in November 2018 and Hein Vanhaezebrouck was then in charge at Anderlecht.

Vanhaezebrouck has written a column in today’s edition of Het Nieuwsblad and explains injuries to other players forced him to hand the talented youngster an opportunity in the first team. 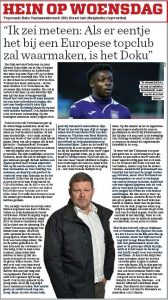 Doku has continued to impress for Anderlecht and his former manager has backed him to join one of the top European clubs in the future.

Vanhaezebrouck explains that he is not surprised that Liverpool and other clubs are following the young forward.

“It is not without reason that Liverpool and all those other greats have already been at his door,” says Vanhaezebrouck.