Once the centre of attention of the Rome based media, Lazio’s interest in Watford’s Luis Suárez has taken a backseat in the past couple of weeks.

Perhaps it’s because everyone needs to wait for the season to be over or maybe it’s due to the fact there’s a certain confidence they can get a deal done at anytime.

Our guess it’s a mixture of both, as the Watford striker remains a target for Lazio, but Igli Tare, their director of football, is keeping his options open, according to Corriere dello Sport.

New names have appeared in the rumour columns, such as Freiburg’s Vincenzo Griffo or Mallorca’s Igor Zlatanović, but these ‘don’t cancel the work’ put in by the Serie A side for the Watford striker. 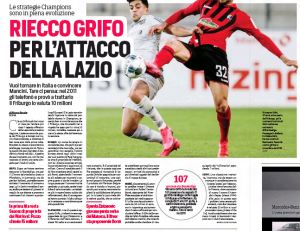 It’s explained talks with him are ‘well underway’, which reiterates previous claims that the Italians have found some sort of agreement with Suárez on a contract.

What remains the obstacle is convincing Watford to sell, but our guess is the Hornets will see how the striker ends the season with Real Zaragoza before making a decision.

The valuation put forward by Corriere remains around €15m, but we all know that could increase if a few more goals are scored between now and the end of the La Liga2 season.

There’s still time for him to do so even if he has yet to find the back of the net after football kicked off again in Spain, failing to score against Alcorcón in a 3-1 loss before drawing a blank again in a 3-1 win against CD Lugo.