Sporting Club de Portugal will try to arrange another loan deal with Everton for goalkeeper Joao Virginia this summer.

That’s according to A Bola and O Jogo, who both say the Portuguese side have no intention of taking up the permanent option in his loan deal.

Virginia has been on loan with the Portuguese side since the summer when Everton shipped him out so he could get regular game time.

He’s not really found that with Sporting, making only seven appearances in all competitions so far, with none of those coming in the Liga Portugal.

That would suggest they’ve not been happy with him, but that is not the case, with A Bola and O Jogo reporting they are keen to keep him next season.

The first reports that Sporting ‘are going to try with Everton’ for a new loan this summer, despite having an option to purchase him permanently at the end of the season. 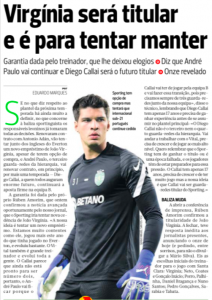 A Bola back this up, stating that Sporting ‘is trying a new loan’ with Everton, although they are also ‘trying the definitive transfer’ as well.

They ‘believe in the goalkeeper’s quality’ but not for the €5m purchase option currently included in his loan deal, which is considered ‘too high an amount’ by those in charge at the club.

Thus ‘negotiations continue’ to work out some sort of agreement, although that might take longer than they think.

loan deal makes no sense for them financially, particularly as he will be in the last year of his deal by 2024.

Perhaps they will agree to another loan deal if it includes a compulsory option to buy, thus guaranteeing them money down the line, but they’ll have to find a figure Sporting agree on before that can happen.