It’s now confirmed that Benfica won’t get a huge chunk of money from an Ederson sale in the next transfer window. The goalkeeper has been repeatedly linked with Manchester City and his form has underlined that he’d be a very good option for the club.

As announced by the club in their financial report this weekend, they only have the right to receive 50% of the amount of a transfer, as the other 50% will go to his former club Rio Ave.

The information comes alongside the announcement of his new contract, which will run until 2023. As reported by the Portuguese press some time ago, the player saw his release clause raised from €45m to €60m.

This change in the clause is a normal procedure made by Portuguese clubs, as they always look for a high amount to protect their players from interest.

But in this case, Benfica are clearly worried about something else. By having only 50% of a sale, they would only get €30m in case a club shows up and pay for the release clause, which is still a low amount for a player of such potential. 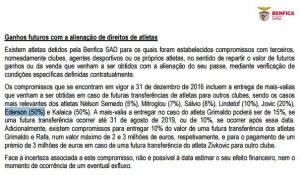 Manchester City are frequently linked to the goalkeeper, as Pep Guardiola is said to be a big admirer of his abilities since the manager’s time at Bayern Munich.

However, with Benfica getting such a low share, Manchester City should now be aware it’s very unlikely Ederson is leaving for much less than the clause.