With Sheffield United now relegated back to the Championship, it is widely expected that Sander Berge, one of their best and most valuable players, will leave the club.

However, no buyers have been found just yet, at least in the Premier League, meaning they could come from elsewhere, such as Serie A.

Napoli, who have waved goodbye to Tiemoué Bakayoko and sent him back to Chelsea, are among the interested parties, according to Corriere dello Sport.

A long-time target of Cristiano Giuntoli, the Naples director of football, the midfielder, described as a ‘giant’, has ‘re-emerged’ as a target for the Italians. 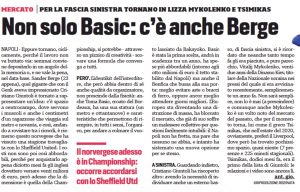 While the ‘costs are not so affordable’, there’s hope that the relegation to England’s second-tier could help ‘find a formula that suits everyone’ going forward.

There would need to be a ‘pinch of creativity’ needed to pull something of that ilk off, suggesting that perhaps a move back to the Premier League would be the likelier outcome.

We’ll have to wait and see, but Napoli are lurking.