Earlier on Tuesday, we covered an article from the French media claiming Aston Villa were getting closer to signing Morgan Sanson.

The Premier League side were, according to Le10 Sport, reportedly in ‘very advanced’ discussions with Marseille regarding a €15-20m transfer, and this has been backed up by La Provence.

The local newspaper, who know the ins and outs of the Ligue 1 club’s operations very well, explain Sanson ‘should be the next player to pack his bags’ in January following Kevin Strootman’s loan to Genoa.

While West Ham were reportedly keen, Sanson is ‘in advanced talks’ with Dean Smith’s side, with contacts ‘established for the past few weeks’.

There was no agreement as of Monday evening, but ‘there is plenty of optimism’ in the player’s entourage, which includes Pini Zahavi, who has represented the midfielder since last summer.

As for the price, ‘many sources report a fee of around €20m’. 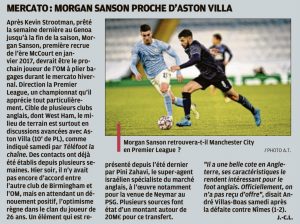 Something is clearly happening, and it appears Sanson might finally get his move to the Premier League to a team in fine form, currently 11th with three games in hand on leaders Manchester United.

Should they win said matches, they could end up equal on points with third placed Leicester City, and there will be hope at Villa Park the midfielder can help them achieve that.

And if that wasn’t enough, TF1’s Julien Maynard added early on Tuesday morning the hope is to find ‘an agreement today’, with Sanson ‘already OK with the English club’.