Nottingham Forest’s wish to keep Filip Krovinovic continues to be torn down by the Portuguese media.

Newspaper A Bola has another story on the Benfica midfielder today, once again claiming that the Eagles’ priority this summer is to let him go on a permanent move.

That’s why things seem so hard for the Championship side.

The outlet takes claims from England saying Nottingham Forest want the player on a new loan deal, and that’s considered to be ‘unlikely’.

A Bola points out that the Eagles currently evaluate Krovinovic at €8m, and will do their best to sell him instead of letting him go on another temporary spell. 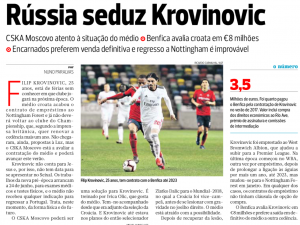 Krovinovic has one year left in his contract with Benfica.

The club don’t count on him, and he wasn’t even contacted to get back to Lisbon.

A Bola writes that CSKA are a potential bidder to land the 25-year-old this summer.

In case Nottingham Forest don’t advance for a permanent move, then the chances of keeping him are practically ruled out.