Newspaper Jornal de Notícias has a story today saying how cautious Sporting CP are about signing Gonzalo Martinez from River Plate, with West Ham waiting in the wings.

The player could end up being the Lions’ most expensive signing ever, with an amount of €14m including taxes and agent fees. And that’s why the club don’t want to take any wrong steps in the process.

There are a few difficulties for the transfer to be made, and the first is to have the money. Despite having an informal agreement, Sporting still need to sell a star to afford the signing. Only then will they make an official bid.

There’s also the matter that Martinez has recently received a pay raise at River Plate, and now seems to be happy at the club, so would only move to Sporting in case of an even bigger salary, probably being the highest-paid player in their squad.

And there’s especially the competition from West Ham. Once again, Jornal de Notícias states that the London side are in for the midfielder, and Premier League clubs are 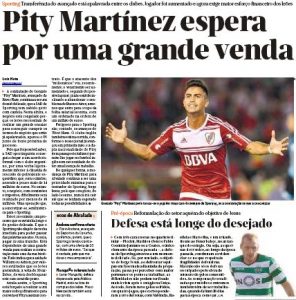 always a threat due to their financial power. Especially in this case, because as mentioned by the newspaper, Martinez already has an EU passport, which would allow him to play for West Ham without difficulties for a work permit.

So despite being a priority for Sporting, Martinez is still a complicated signing to achieve. There’s no doubt that West Ham would have more resources to take the player, but that would depend on how badly the club want him.