For a while now, we’ve covered a number of reports from Portugal regarding Porto’s interest in signing Marko Grujić from Liverpool.

The Serbian enjoyed a good season with the Liga NOS side last year, and despite not trying to make the move permanent immediately, it’s something they are considering now.

Liverpool want around €15m for their midfielder, which Porto aren’t willing to put up, leaving the door open for other clubs, like Sassuolo, to try their luck.

That’s what Gazzetta dello Sport are reporting on Monday, claiming the Serie A side are looking into a move for the 25-year-old in case Manuel Locatelli were to leave.

Seen as the ‘ideal replacement’ for the Italy international, the Liverpool player is currently on pre-season with Jürgen Klopp and his staff, who are waiting for that magic number €15m to be hit. 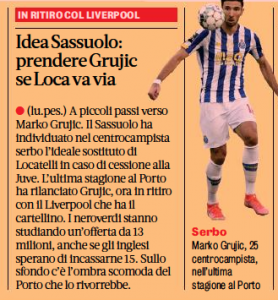 Sassuolo, down their end, are said to be working on ‘an offer of €13m’ for the player, which they clearly hope will be enough to sway the Reds even if the bid will be short of the demands.

We’ll have to wait and see what happens, but it’s certainly something that we’ll be keeping an eye on going forward.