Home Europe Club will be thrilled to sell 2 players to West Ham for...
SHARE 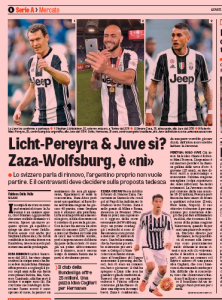 Juventus are having something of a clear-out. It’s not that they need to financially, it’s just that there’s certain players who aren’t hugely important in the squad, and therefore a move makes sense for all involved.

However, the players don’t neccesarily see it that way. Italian newspaper Gazzetta dello Sport reports on Thursday that West Ham are interested in both Simone Zaza and Maxi Pereyra, and they’re not the only club linked.

Wolfsburg have been pushing hard for Zaza, for whatever reason, but he won’t accept them move, and Juventus are having issues getting him away from the club.

The prices probably aren’t helping. It’s stated Juve want €25m for Zaza and around €18m to €20m for Pereyra. That leaves a limited amount of destinations and vastly reduces the chance of the players remaining in Italy.

Juventus would be thrilled if West Ham solve the problem for them, but it doesn’t sound like the greatest deal, and Juve may need to reassess their valuations.