Home Europe Club ‘will sit at the table’ with Manchester United to discuss player’s...
SHARE

AC Milan are planning to sit down with Manchester United at the end of the season to discuss Diogo Dalot’s future.

The Portuguese full-back has been on loan with the Italian side since the summer, having departed Old Trafford when it was clear he was not part of the plans for this season.

He’s done reasonably well in Italy, with 29 appearances in all competitions and two goals and three assists to his name so far.

He is set to return to Manchester United in the summer when his loan deal expires, with conflicting reports about whether Milan want to keep him.

While there have been claims that they are keen to do so, the latest from Italy has been that he is set to return, and Milan have decided to look elsewhere.

Gazzetta Dello Sport pick up the thread today in a piece covering Milan’s plans for the summer and their dependence on qualification for the Champions League.

In it, they explain that the extra funds from qualifying for Europe would give Milan more leeway in the market and, while not stated explicitly, that could impact Dalot. 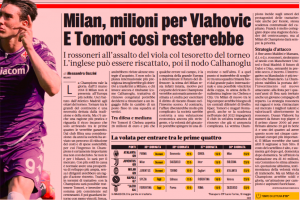 On him, the Serie A side’s leadership Paolo Maldini and Frederic Massara ‘will sit at the table with Manchester United’ at the end of the year.

That would suggest Milan are still keen on keeping Dalot, although they first plan to sit and talk to United to see what their demands are first.

We don’t know what those are as yet; indeed it seems Milan don’t either, so we’ll have to wait and see before Dalot’s future is determined.