Home Premier League Chelsea Club ‘will not accept to sell’ player to Chelsea in January –...
SHARE

As Darwin Nuñez continues to be the man of the moment in the Portuguese League, we see today all local sports newspapers featuring a story on the Benfica striker.

With Uruguayan star Luis Suarez speaking about his compatriot on Twitch, it’s now revealed that the 22-year-old had been suggested to Barcelona, who missed a chance in the past of signing him for a minimal fee.

Now even though several Premier League clubs continue to be linked to Darwin, only one gets more serious attention from the Portuguese media, and that’s Chelsea.

It’s once again Record who says the Stamford Bridge side are alongside Atletico Madrid, Milan and Paris Saint Germain in the race for the Benfica star.

Why does it look like the newspaper really knows something about Chelsea? That’s because they also mention Manchester City, but make it clear that they only know about Pep Guardiola’s side because that’s being reported in England. 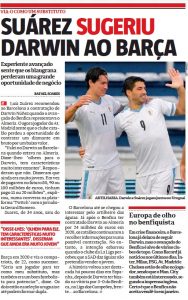 This time, Record says it’s ‘certain’ that Benfica ‘will not accept to sell’ Darwin Nuñez in January, and they’re well protected, since the striker has a release clause of €150m.

Luis Suarez claimed the Eagles player will cost between €80m and €100m in the future, and that’s what the Portuguese newspapers have been talking about today.

Outlet A Bola is another one with a story on Nuñez, and once again, they only talk about English clubs when taking claims from the English press.

Therefore, it continues to be interesting to see Record insisting on Chelsea’s pursuit when no one else is.