Manchester United and the centre-back position is a tale as old as time, regardless of their signings of Eric Bailly, Victor Lindelöf or Harry Maguire in recent years.

There will always be space in column inches or website storage for speculation about the club’s backline and the efforts they could make to shore it up.

Kalidou Koulibaly is a particular favourite in recent years, but on the younger side of things, Benoît Badiashile has also popped up here and there.

Currently contracted to AS Monaco, the 19-year-old has enjoyed a decent season of first-team football this year, making 20 appearances in all competitions under Leonardo Jardim and Robert Moreno.

This has only added to Manchester United’s interest in the player, who have been after his services since at least May 2017, back when José Mourinho was still manager.

It was explained back then United had made a ‘firm proposal’ for the player when he was still 16, trying again a few months later as revealed in February 2018.

A year then passed, but January 2019 saw their interest return, as it was pointed out the Red Devils were still ‘closely following Badiashile’, before a report in July suggested they had ‘positioned themselves’ to sign him. 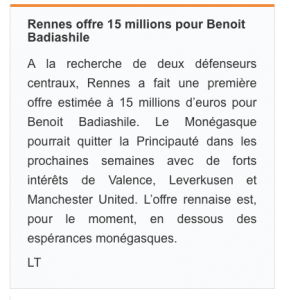 Fast forward to June 2020, and they are still hovering, as RMC Sport claim the player ‘could leave the principality in the coming weeks’, with ‘strong interest from Valencia, Leverkusen and Manchester United’.

This comes as Rennes made the first move, offering Monaco €15m for their young starlet, which is currently ‘beneath their hopes’ from the player’s sale.

That means United would be looking at having to pay more than that if they do want Badiashile this summer after three years of actively following and pursuing his signature.