Krzysztof Piatek is still at AC Milan, despite all the rumours which have surrounded the striker this month.

He’s been linked repeatedly with a loan move, however, Milan would like a permanent sale and have put a €30m price-tag on the Poland international.

Monday’s edition of Gazzetta dello Sport talks up interest from Tottenham, however, it doesn’t appear that the Premier League club have made any real effort yet to sign the player.

Gazzetta states Milan are ‘waiting for a written offer from Tottenham’ and are looking forward to receiving the telephone call from London. The Serie A side ‘know’ that Spurs are keen, even though the club haven’t officially made any moves for Piatek yet.

It may be wishful thinking from Milan, especially on their €30m request. Tottenham seem to have been looking for a cheaper option, or perhaps a loan with a redemption clause for 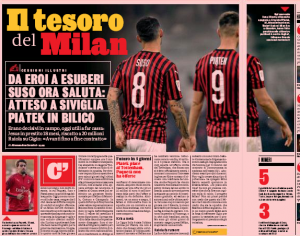 Should Spurs not have the cash now, there may be the chance of a loan with a mandatory buying clause, but that’s not mentioned by Gazzetta today.