Tuesday saw reports in the UK claim Manchester United have made progress to sign Frenkie de Jong and there were positive updates suggesting a deal could be agreed with Barcelona for a €65m fixed fee plus variables.

Mundo Deportivo on Wednesday state the Red Devils want to sign the midfielder as soon as possible. ‘Maximum pressure’ is on, and contacts between the two clubs are ‘constant’ for the 25-year-old.

However, Barca have not received an offer that fulfils their aspirations as they have no plans to accept an offer that includes a €65m fixed fee.

It’s claimed the Camp Nou side are ‘waiting for an offer’ from United that pleases them.

The Catalan club invested €75m plus bonuses on De Jong and close to €40m of it is still to be amortised. This forces Xavi Hernández’s side to sell him for a higher fee. In addition to this, he earns €19m [likely gross] per year. The player’s exit can help the club lower their wage bill.

Xavi’s side have two days left to close the 2021-22 financial year. The sale of 10 percent of their TV rights should be made official today. Due to this, it’s stated there is no urgency for Barca to sell De Jong for a lower price, but in reality they’d surely like his wages gone before La Liga start looking at their accounts. 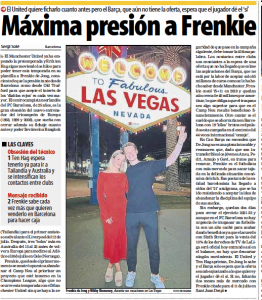 Manchester United and Ten Hag, meanwhile, continue to press for the Dutchman’s signing. The manager hopes the deal goes through soon so that he can have his compatriot for the first pre-season.

Meanwhile, Sport now state the position of the two clubs is getting closer, but it would be of no use if the player does not agree to join United.

The Catalan outlet have learned De Jong is determined to stay at the Camp Nou, and has already informed both clubs.

The situation ‘has become tense’.

He doesn’t like the fact that everyone is trying to push him out of Barca. The Dutchman has even come to doubt his agent, Ali Dursun, for his insistence on placing his client at Old Trafford.

Although the midfielder wants to continue to the club, Barcelona are determined he is sold as it will help them financially.