As Italian newspaper Il Messaggero brings a story about Roma’s plans for the summer, they consider Maurizio Sarri to be a serious candidate to take charge of the Giallorossi next season.

According to the outlet, club director Franco Baldini would have told president James Palotta about the manager’s goodwill to join the Italian side.

Of course, it all depends on Sarri’s future at Chelsea. If they do let him go at the end of the season, then the boss becomes the main target.

Roma have other names on the list, with Antonio Conte and José Mourinho being the ‘most complicated’ of them. Meanwhile, Marco Giampaollo and Gian Piero Gasperini are more realistic targets, with the club preferring to have an Italian manager in charge. 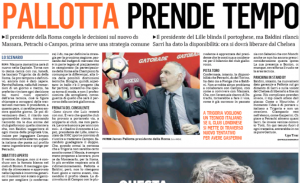 Now Roma are set to wait and see what Chelsea’s stance on Sarri will be. If the manager leaves London, then the Italian side will be making a new attempt for him.