Having Theo Hernández shine down the left of their defence, Milan appear set for years to come at the position, but the same cannot be said for the opposite side.

That’s why Stefano Pioli, freshly confirmed as their manager for next season, wants to bolster that area, with one name in particular in mind: Tottenham’s Serge Aurier.

The Ivory Coast international was José Mourinho’s sole real option in the role over the course of the second half of the campaign, meaning it might be a difficult task to convince them to part ways with the 27-year-old in the coming months, but Milan are prepared to wait.

Gazzetta dello Sport reckon it would take ‘at least’ €15m to get him, knowing full well that ‘dealing with Tottenham is never simple’, and the deal ‘could be concluded at the end of the window’. 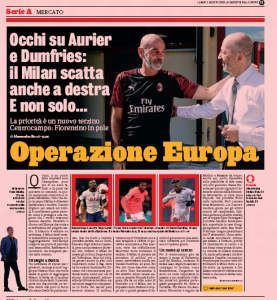 Furthermore, they are aware that €15m would be enough to get Denzel Dumfries from PSV, described as ‘another Theo Hernández’.

It’s certainly something they want to look at going forward, but there’s little rush, meaning this could be one we see popping up a number of times in the coming months.