Earlier this week, we carried a report from AS, who explained West Ham United ‘want’ Athletic Club Bilbao’s Unai Núñez, but Manuel Pellegrini’s side need to convince the player for a January transfer.

It was also stated that Bayern Munich are looking at the centre-back as a potential replacement for Javi Martínez.

The player has started in only five league matches this season and has a relatively low release clause of €30m.

Saturday’s edition of the same newspaper claims the Hammers have informed the Basque club about their idea to pay the 22-year-old’s buyout clause.

Aitor Elizegi completed a year as Bilbao president on Friday and he reviewed the work done by the club under his leadership. He also discussed the West Ham target and stressed it’s difficult for the La Liga side to bring in a replacement for Núñez. 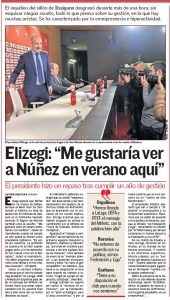 “I would like to see him in summer training with [coach Gaizka] Garitano. He is one of us. The ambition is good and it is not easy when you play little, and it has demonstrated it more in the Bernabéu,” Elizegi was quoted as saying by AS.

“It is difficult to find a centre-back like Unai Núñez and we are not interested in looking for one.”

Should West Ham pay the clause, and the player agree, there’s not a great deal Athletic can do about it.