Barcelona are continuing with their efforts to sign Lautaro Martinez from Inter Milan. The chase has been going on for some weeks, and now there’s a stand off between the two clubs about how much the transfer would cost.

Inter want the player’s buyout clause, thought to be around €111m, and Barca would prefer to include some of their many fringe players in the operation. Despite that disagreement, there’s still confidence a deal will be done.

That means Inter will be looking for a replacement, and Mundo Deportivo reports the club have made a ‘step forward’ for Alexandre Lacazette. The 29 year old has been repeatedly linked with a move away from Arsenal, with Atletico Madrid another of the clubs thought to be keen.

Lacazette is now Inter’s ‘first option’, at least according to the claims, with Edinson Cavani and Timo Werner now thought to be off the Italian club’s agenda. 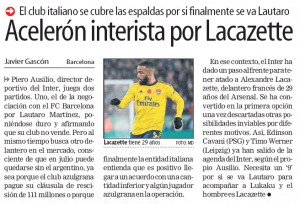 What Arsenal would make of this isn’t explained, and there’s not even an estimated price for Lacazette in the report.