For the past couple of weeks, we’ve been seeing the Italian media be very confident that Roma are signing goalkeeper Rui Patricio from Wolverhampton Wanderers.

Recent reports claimed the transfer is now a matter of hours, as the Giallorossi are really close to finding a deal with the Premier League side.

But it turns out that a Portuguese newspaper now gets involved in this story just to say that things aren’t like this. That’s O Jogo, who were informed by ‘sources close to Wolves’.

The outlet writes today there’s still a ‘significant difference’ between what Roma are offering and Wolves’ demands. That’s because the Giallorossi have put €10m on the table, and the Premier League side ask for €15m. 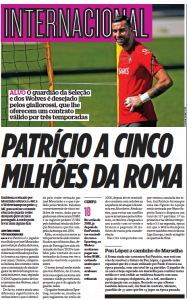 O Jogo says contacts between the three parties ‘have been intensified in the past few days’. Both because Portugal were eliminated from the Euros and also due to José Mourinho’s wish to sort the issue as soon as possible.

The newspaper claims the deal should ‘still take a few more days’ as the Italian side work to convince Wolves.

It isn’t usual for the Portuguese media to get involved in news that has nothing to do with local clubs, as they normally cover the claims from other countries without bothering getting information about it. So if O Jogo are saying something, that’s because they probably really have their sources.