Portuguese side Sporting are expected to soon confirm the signing of Pedro Porro from Manchester City.

Newspaper A Bola writes today that the Lions are triggering the buying option in the full-back’s deal before the start of their pre-season works.

Manchester City loaned Porro to Sporting at the start of the season on a two-year deal, and the Lisbon side could sign him permanently for €8.5m until the summer of 2022.

Now there are two reasons why the Lions are anticipating the signing.

His season was pretty good, helping the club to win the league title after many years they’re also afraid of the other sides who have been interested in signing him. 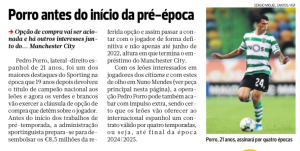 Manchester City spent €12m to sign Porro from Girona in 2019.

They first sent him on loan to Real Valladolid, and last summer, agreed the two-year spell with Sporting.

He can now leave the Premier League side permanently without having ever played for the club.