Following Gonçalo Ramos’ hat-trick in the Champions League clash against Midtjylland  this week, the Portuguese media is heavily talking about his potential departure from Benfica.

Earlier today, we covered a report from newspaper Record which said Nottingham Forest are bidding €30m for his signing, and other offers may be on the way.

It turns out that many other outlets have articles about the 21-year-old’s situation, all of them pointing out that his summer sale has turned into a real scenario.

What seems to be a consensus in local reports is that this €30m offer from Nottingham Forest should not be enough to take Ramos from Lisbon. Newspapers A Bola and Correio da Manhã both agree that despite the Eagles’ initial request of €40m for the striker, the Portuguese club are still raising their demands for the player, with the latter mentioning a €45m price. 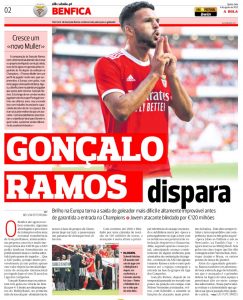 Another factor that most Portuguese outlets agree on is that Benfica wouldn’t sell the player before they guarantee their spot in the Champions League’s group stage. The striker had already scored two goals against Fulham and one against Newcastle United, both in pre-season, and now this hat-trick proves he’s on fire to help them qualify for the tournament.

Apart from Record, no other newspaper mentions Nottingham Forest’s interest. They are just sure that his exit from the Eagles this summer is still possible, although a very convincing bid will be needed, especially because he’s protected by a €120m release clause.