This week’s edition of SportBild explains the Bundesliga side are ‘serious about’ signing the Bosnia and Herzegovina international.

The Kai Havertz and Kevin Volland transfers to Chelsea and AS Monaco respectively helped Bayer Leverkusen raise in excess of €100m this summer.

The German side are looking to use those funds to bolster their squad, and Peter Bosz wants his club to sign a ‘top defender’.

Bosz has “six right footed centre-backs” at his disposal, and is looking for a left footed player. This is where Kolašinac fits in, who can operate as a left-back or as a left centre-back.

Leverkusen are keen on landing the Gunners player, and SportBild state ‘concrete discussions’ will take place this week. It’s not clear whether it’ll be between them and the player, or between the two clubs.

The former Schalke man would be available for €10m, and the figure is ‘relatively low’ because of his high salary. The 27-year-old earns €9m per season, and Bayer Leverkusen could lower his salary by offering a longer contract and including bonuses. 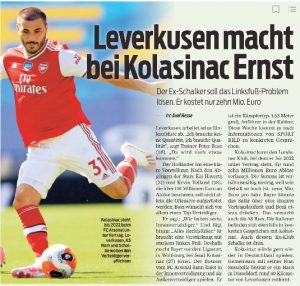 Apart from Bayer, AS Roma and Schalke are also interested in the Arsenal defender. The Serie A side have held concrete talks with Kolašinac, but he ‘would like to play in Germany again’.

Kolašinac and his wife, Susubelle, own a house in Düsseldorf, which is not far from Leverkusen.