Home Europe Club could send player to Fulham as they worry over €20m fee...
SHARE

Marko Pjaca brought himself to a wider audience with some great flashes for Croatia during Euro 2016. It earned him a move from Dinamo Zagreb to Juventus, but the young attacker has struggled to find his way with the Turin club.

A loan move to Schalke didn’t go as hoped for and the same is happening this season with Fiorentina. There were big hopes for the 23 year old at the Florence club but he’s not quite lived up to them and has been in and out of the team.

La Nazione report on Tuesday that Juventus are worried Fiorentina won’t be using their €20m buying option in the summer and that could lead to a devaluation of the player. The club are therefore ‘pressing’ for his early return, with the plan to send him elsewhere.

A further loan could be arranged in Italy, but Fulham are also mentioned as a candidate. 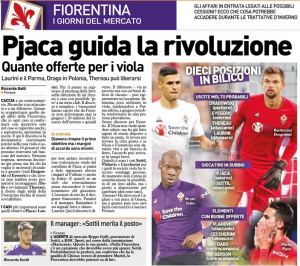 Having Claudio Ranieri as manager, the Cottagers are linked with endless players from Italy, and there’s a clear need to add to the squad this month.

Pjaca is a very talented footballer but it’s arguable a relegation fight in the Premier League wouldn’t be the best environment to help him get his career back on track.