Premier League sides Chelsea and Liverpool continue to be named as potential destinations for the Porto left-back Alex Telles.

This Tuesday, newspaper Correio da Manhã has a story saying the player is not for sale, as the Dragons continue rejecting offers for him.

The latest bids are said to have come from Bayer Leverkusen and Juventus, both of €35m, and were immediately turned down by the Portuguese side.

But Porto can’t guarantee they won’t lose the player this summer, because despite rejecting these offers, Telles’ release clause is only €40m, and can be activated at any time. 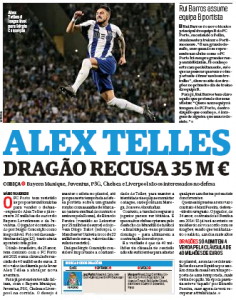 Last month, we could report that Blues and Reds were both in the race, but only the release clause would take Telles from Porto. Sport Witness was informed that both the English clubs had made contact over a potential deal, showing it was more than a usual rumour.

This is clearly Porto getting it out there, to Liverpool, Chelsea and others, that it’s €40m or no deal.