Home Europe Club could sell key player to Manchester United, and replace him with...
SHARE

Raphael Varane continues to be the subject of multiple daily articles in the Spanish sport media, and Manchester United and PSG continue to be mentioned as the potential destinations.

The Frenchman’s contract expires at the end of next season, and it’s long been reported that he fancies a change of scenery. Real Madrid have made attempts to secure a renewal, yet the defender hasn’t been responding.

Sergio Ramos’ exit was inevitably, and understandably, seen by some as a sign that Varane would surely be staying, with the assumption being Madrid would pay him whatever it takes, given he’s now even more important to them.

In Spain, some are dismissing that, with Varane’s stance thought to be quite strong right now. So he’s either putting up a convincing act or is genuinely keen to leave Madrid.

Mundo Deportivo report Los Blancos don’t want to repeat the Ramos ‘soap opera’, so if Varane doesn’t respond soon then he’ll be placed on the market. That means they could look at other targets, which is where Manchester City come in.

The report states Manchester United have ‘long been interested’ and PSG are ‘also very attentive’ to the situation. Madrid are now looking at replacements, should the sale actually happen. 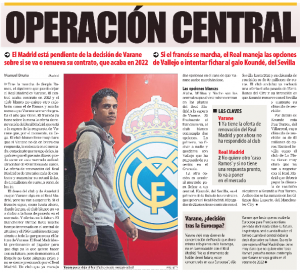 Jules Kounde and Pau Torres are options, and they’ve been joined ‘in recent days’ by Manchester City’s Aymeric Laporte.

None of those are going to come cheap, and even if there’s been rumours about Laporte being unsettled under Pep Guardiola, it’s unlikely Manchester City would present a bargain deal.

Alternatively, Madrid could try to get by on what on that have, even if they face the prospect of losing both Ramos and Varane in the same window.