Home Europe Club seem to be happy to sell reserve to Everton for €18m...
SHARE

Everton’s pursuit of Sporting midfielder Matheus Nunes continues to be a hot topic in the Portuguese media.

Earlier today, we’ve already seen newspaper A Bola claiming that the Lions are hoping they can make €25m by selling the player to the Toffees.

Now as other newspapers talk about Sporting’s transfer plans, they claim that Nunes’ departure could end up having a big impact on how the club will act for the rest of the transfer window.

The Lisbon side are currently working on the permanent signing of João Mario, who’s been loaned by Inter Milan this season. He’s been mostly a starter for the Lions, while the Everton target is his primary substitute. 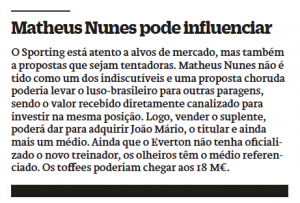 So it means that by selling Nunes, Sporting could go for the signing of João Mário and also look for another midfielder. That’s why, according to O Jogo, that transfer could ‘influence’ a lot of other business.

The newspaper claims that even though Everton are still to announce their new manager, the club’s scouts have the midfielder ‘referenced’. They say the Toffees could reach €18m when making a potential offer.