Wolves signed Pedro Goncalves from Valencia in 2017, and the youngster joined their youth team. His only appearance for the club came as a substitute in the EFL Cup, and in 2019 he moved to Famalicão.

There he was able to relaunch his career and reputation as one of the most exciting young talents in Portuguese football. Sporting quickly noticed, and the 22-year-old moved to the Lisbon club in August 2020.

Since then he’s shown just what Wolves have missed and is currently the top scorer in Liga NOS with 14 goals so far this season. Such is his impact at Sporting that there’s already been links with top Premier League clubs like Liverpool and Manchester United.

Record report that Famalicão ‘rescued’ Goncalves from his troubles at Wolves, and he hasn’t looked back since.

With interest during the January window, Sporting were protected by the player’s €60m release clause, and insisted a club would have to match that for a move. They want to 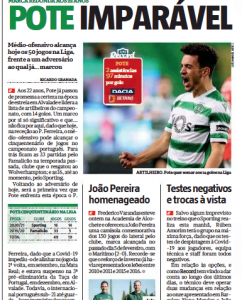 keep him in the summer, so will continue to point to that lofty figure.

Given Bruno Fernandes’ success since moving to England from Sporting, there’s greater notice being taken of what’s happening with the youngster.

For Wolves, he’s very much one that got away.