Home Premier League Brighton Club rejected €25m bid from Brighton in the summer – Could be...
SHARE

It was no secret that last year, Brighton & Hove Albion perhaps relied on Neal Maupay for goals a bit too much.

That’s why the search for a new striker took place in the summer, showcased by their pursuit of Stade de Reims’ Boulaye Dia, among others.

Well, it appears, at least according to Tuttosport, that Brighton went after one player rather seriously in the form of Christian Kouamé.

Once very close to Crystal Palace, the Ivorian is currently at Fiorentina, who were the ones who rejected an offer for his services in the summer from the Seagulls. 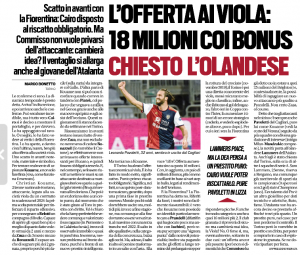 Tuttosport claim Rocco Commisso turned down €25m from Brighton for his striker, now being discussed as a potential target for Torino, who are willing to pay around €16m.

That means Fiorentina, should they sell, would be looking at a loss of around €9m compared to what they could have made had they accepted the offer from Potter and co. in the summer.

Hindsight and all that.