Tottenham Hotspur are interested in Takehiro Tomiyasu, and last week reports in Italy states they have already made their ‘first offer’ of €18m for the Bologna defender.

On Monday, Tuttosport reported the north London club could raise their proposal to meet the €20m valuation set by the Serie A side.

Il Resto del Carlino, a newspaper local to Bologna, claim that Spurs are joined by West Ham United and Arsenal in the battle to sign the 22-year-old.

It’s claimed the Italian club have ‘refused’ an offer worth €18m [€15m + €3m bonuses] from Atalanta and another bid of €20m from Spurs for the Japan international.

Bologna chairman Joey Saputo values the centre-back at €25m according to the report, higher than some other claims, and will only sell him this summer on his ‘own terms’.

They have not sat down to negotiate with either Atalanta or the Premier League side, and have warned them to ‘return to the office only with the requested sum’ of €25m. 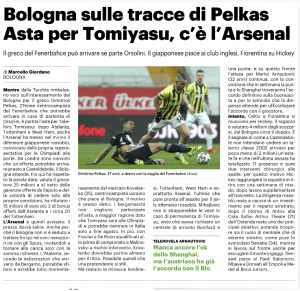 The Rossoblù ‘awaits’ and are ‘convinced’ of receiving an offer from London, but it’s not made clear whether Bologna are waiting for a proposal from Spurs or Arsenal, since the Gunners are ‘ready to attack’ for Tomiyasu’s signature.

According to Calciomercato.it, the player ‘already has an agreement’ with Tottenham.

If the English club can meet Bologna’s demands, a deal could be concluded soon.