On Tuesday, we covered an article in Corriere dello Sport about how Lazio were considering making a return to sign Olivier Giroud in the summer.

The idea stemmed from the fact the French striker had already said yes to them towards the end of January, but with Chelsea unwilling to let him go, the transfer couldn’t happen.

Now, the Stamford Bridge barrier doesn’t exist anymore as Giroud is free to speak to clubs about a contract in the summer, which plays to Lazio’s advantage.

Corriere dello Sport have an update on Wednesday, where they reveal the Serie A club’s plan to try and convince the former Arsenal man that he should choose them to continue his career. 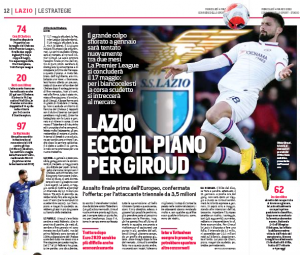 They state Lazio will offer him a three-year contract with €3.5m/year plus bonuses in May, which, if accepted, could see him stay in Rome until close to his 36th birthday.

There’s hope that the near certainty of being able to play Champions League football next year, as the club is fighting for the Serie A title, will be a bonus in their favour.

There is competition, however, with both Inter and Tottenham, interested, which means that Lazio will have to be extra convincing when they attempt to woo him, especially since the player is so comfortable in London ever since he moved to Arsenal from Montpellier.