Inter Milan are willing to sell youngster Cesare Casadei to Chelsea this summer if they stump up €15m for him.

That’s according to Tuttosport, who say the need for money at the Italian club could see the player ‘sacrificed’ by those in charge.

Casadei has been heavily linked with a move to Chelsea over the last few weeks, with them seemingly focusing on signing youngsters for the future.

They’ve already signed Carney Chukwuemeka from Aston Villa but that has no impact on their interest in Casadei, which remains firm.

Tuttosport say the youngster is ‘prized’ by the Blues and if they ‘come up’ with €20m, perhaps even €15m, then Casadei will be sacrificed to aid the budget. 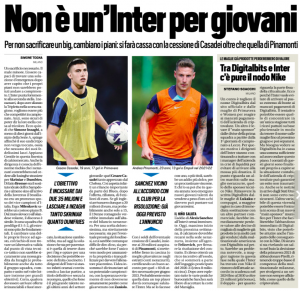 That would be a ‘very painful choice’ for Inter Milan to make but a strictly necessary one because of the finances at the club.

Selling Casadei, on a permanent deal without a buy-back clause, is seen as the only way to ‘soften’ the sting of finances and free up some room.

It means Chelsea have every chance of signing the 19-year-old, all they have to do is put the right amount of money on the table.