Last week, SportBild explained Bayern Munich manager Hans-Dieter Flick spoke to Leroy Sané over the phone for 30 minutes and that changed the former’s stance on the Germany international.

This week’s edition of the same outlet is stating the Bundesliga winners have reached an agreement with the Manchester City winger over a five-year contract.

The two clubs must agree a deal for the transfer to be completed.

The 24-year-old last made an appearance for Pep Guardiola’s side in August 2019 as a knee injury forced him to spend a long spell away from the pitch.

City’s situation is even worse. With the Etihad club being banned from the European competitions for the next two seasons, the report adds they ‘must’ raise millions through player sales to avoid breaching Financial Fair Play rules.

Those situations, coupled with the duration left in Sané’s contract [expires in 2021] decreases his valuation.

It’s claimed ‘a transfer fee of 40 million euros has been deposited as a basis for negotiations with City’.

Even if an agreement could be reached for a slightly higher fee, it is significantly lower than €100-150m repeatedly discussed last summer.

LIAN Sports, the agency which now manages the former Schalke player, has a ‘close relation’ with City’s Txiki Begiristain, and this could help in negotiations.

If Flick’s side end up taking Sané for a fraction of the fee that was demanded last summer, it will be considered as a huge success for Bayern’s new leadership, including sporting director Hasan Salihamidzic and board member Oliver Kahn. 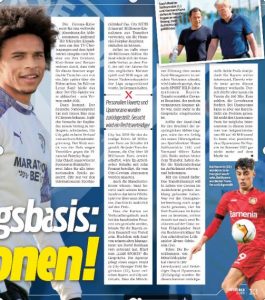 The duo are in favour of the transfer and they have already received approval from the club’s supervisory board.

It remains to be seen whether or not City will accept a proposal of €40m for Sané, who has already rejected offers to extend his contract with the English champions.