Home Europe Club put other business to one side to focus ‘all efforts’ on...
SHARE

With the transfer window now officially open in Italy and FFP account balancing a thing of the past, teams can focus on the one thing that really matters: buying players.

Inter have big plans for this summer, wanting to please Antonio Conte as much as possible, which includes gifting him Manchester United’s Romelu Lukaku, somehow.

The Serie A side have taken the decision of putting all other deals on the back burner, solely focusing on finding a way to purchase the Belgium international and make him their own.

This means players like Nicolo Barella and Edin Dzeko will have to wait a bit longer to find out if their future is in Milan or not, as ‘all efforts’ will be focused on Romelu Lukaku. 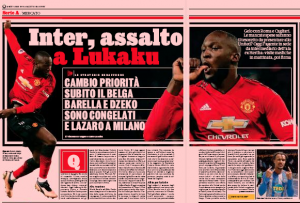 Those in charge at Inter are ‘working to get as close as possible to Manchester United’s request’, and are ‘ready to go up to €70m’ for the Belgian.

In fact, Gazzetta believe there’s a chance the Italian side could even dip into the funds put to one side for either Barella or Dzeko to ensure they get Lukaku, and then simply hand the Bosnian a contract next year when his deal with Roma comes to an end.

Federico Pastorello is expected to be in Milan once again on Monday to act as intermediary in the Valentino Lazaro deal, which presents a great opportunity to sit down and chat about the Manchester United forward, perhaps even going as far as making that first offer.